A Different Kind Of Ride 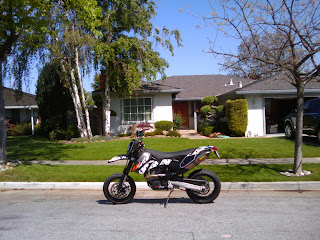 It was a different kind of ride than I expected today.   The kind where I got home with a full tank of gas still in the tank.  The kind where I covered about 10 or 15 miles in four hours.  The kind where Nathan sat in the back of an SUV and Don and I rode around on the street in front of his house like kids playing bicycles.  Yep, it was a good, though unexpected, day's ride.  Well, good except for Nathan's ankle.  It was twisted in the parking lot of the coffee shop we were all meeting at before the ride really got started.  He made it back home before he realized he couldn't put weight on it anymore. 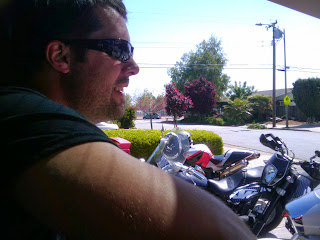 (Nathan on the "Ride" from the shade of an SUV on his driveway.)

I have no way of knowing now for sure that the mountain roads weren't straightened in the night.  I'm okay either way so long as Tuesday's forecasted rain frizzes them up again. Luckily, when a motorcycle goes down, even very slowly over something slick in a coffee shop parking lot before a ride starts, there are things that need to be adjusted.  And that means that Don and I had an excellent reason to ride ALL THE WAY to Laurie and Nathan's house to play with tools on Nathan's new KTM with him while he hopped around on one leg.  A little bit later, the three of us had the turn signal fixed up, the forks had been loosened out of the triple clamp, wriggled around, re-set and re tightened down.  Sometimes when a bike lays down, one of the forks will bind up a little in the triple clamps making the steering a little off.  Anyway, easy fixes all but it was a good excuse to play with tools with friends.  Nathan's new KTM looks as good as it did when he started out that morning. 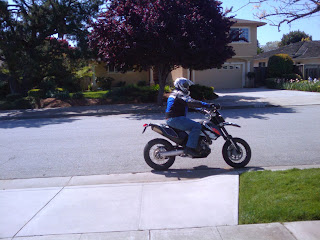 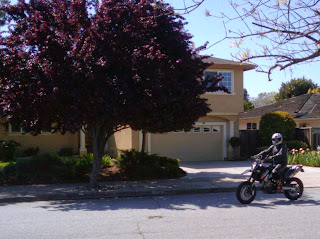 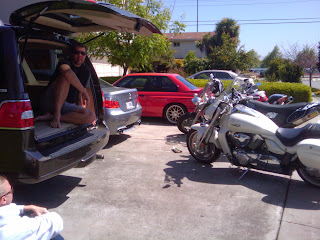 (Nathan relatively near his new KTM.)

Do you remember riding your bike back and forth in front of your house as a kid?  Maybe riding around a block or two and then just playing with u-turns and quick stops and riding in loops in front of the house?  Did you ever pretend your bike was a motorcycle?  Yeah, me too.  It turned out to be every bit as fun as I thought it would be.
Posted by Randy at 10:21 PM No comments: 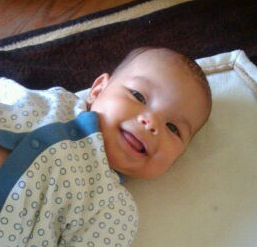 This morning at 2 am Enzo was making a bit of noise and I went to change his diaper.  I kept the lights low, took off the old, and placed the dry cotton under him.  Then it got funny.  His eyes were still closed and he was playing around with his legs.  Super cute. One of his hands grabbed my arm as I was trying to wrap his diaper around him.  His other hand grabbed at his feet (he has recently discovered his feet and likes to hold them- super adorable and fun to watch) and he pulled his legs all the way up making it impossible to finish with the diaper.  I could only chuckle.  I gently moved his legs down and thought I had a chance to finish with one hand... I didn't dare move the arm he was holding because that just felt too good.  Of course, his legs sprang back up.  This happened a few times and in my sleepiness all I could do was chuckle.

And then, Enzo's eyes just opened up... he looked at me for one second and then just smiled the widest happiest morning smile I have ever seen!  I love this kid.  I finished with his diaper in seconds, picked him up and let him snuggle up in my arms.  It was too early to talk but still I went and told Tami.  She said, in her own half sleep, "He woke up and smiled when he saw you... he was happy to see you."  Yes!  What a great day already.  How perfect this is and it is not even 8 am now as I get ready to cover myself in gear and go for a motorcycle ride with friends.  Today is one of those days I will smile in my helmet the whole morning even if I find every mountain rode had been straightened in the night. 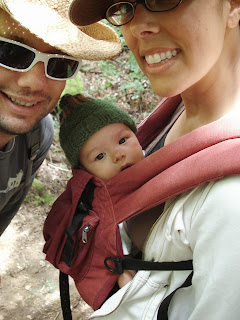 
It takes a certain degree of psychological tension for me to write.  An almost-satisfied-but-not-quite-there kind of vibe.  The sort of distance from satisfied where the writing itself feels like the cure.  For a blog post this might happen when telling about Enzo or my day's adventure is exactly the last bit-of-perfect I need to get to that satisfied feeling. Feeling too good already and there is no reason to write; I can just be.  Feeling too down and writing is too much work.  I still write at least a blog post a day in my mind but they don't make it out unless there is a convenient distance separating me from perfectly satisfied and a 0 distance separating me from an internet connection.  I am okay with that.  My wife, however, is not okay with that at this time.  You see, way back on April 3rd Enzo experienced what his mother appears to believe is among the all-time greatest milestones in Enzo's early life.  And, I've not written about this momentous event because I have simply not been within that perfect writing zone.  Until now, that is.  Tami has made it abundantly clear that my peace lies on the other side of this blog post so here I find myself, as luck would have it, in that perfect writing zone.  What could be so important in Enzo's life?  (Do you really need to ask?) 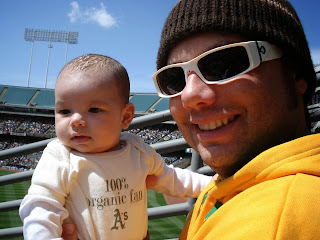 We three joined Tami's parents for Enzo's first baseball game on April 3rd at the Oakland Coliseum to watch the A's play the Giants in a pre-season game.  Yes, I said 'we' and if you have read previous posts you may have noticed that I don't tend to go to baseball games.  But I had to.  This was Enzo's first and I knew it would be a HUGE deal for him... (okay, we all know to substitute 'his mom' for 'him', right?).. and I knew that Tami would be tempted to exaggerate this glorious day in our son's history over the years.  So, I had to go as a historical record keeper, you know, to keep her honest.  This way, Enzo doesn't start telling teachers and friends in kindergarten how he went to his first baseball game on that great day when there was a record 25 grand slams hit by the greatest team ever in history called the A's.  My wife is generally honest but she may be tempted to overly exaggerate for an event like this when the A's and her son were together in the same place for the first time.  This is a special event for her indeed, the importance of which likely rivals her professed love for her husband by several magnitudes.  I can't blame her for slightly exaggerating when speaking to me directly, but this is different.  The art of steady exaggeration in an argument with me, for example,  is a necessity to keep the argument fair as I LOVE to exaggerate shamelessly.  It just makes life that much more interesting.  But when the future credibility of our son is at stake, I figured I had better suck it up, borrow an A's sweatshirt, and go to the field. 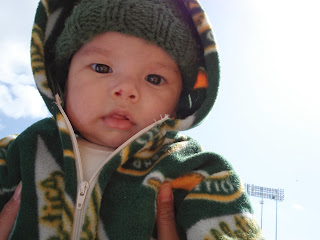 (Enzo's Grandma Phyllis made that jacket for him.)

So, how was the game?  It was fun.  There is something attractive about a large field of vegetation surviving in a paved world and a sun that pops in and out of the clouds.  We sat near center field and that was cool because center field player for the A's is number 11 Rajai Davis and that is Enzo's favorite player.  Why?  Here is my telling of the story, pulled together from the retellings I have heard.


Last season, when Enzo was still in Tami's belly, Tami and her sister Traci were at one of the many games they go to with their season tickets.  Traci yelled out "Rajai! Throw up a ball to my nephew!" and Tami smiled and pointed to her giant pregnant belly.  Rajai threw a ball up for Enzo.  Cool.  So, before he was born, Enzo had a ball from the game, his mom's ticket from that day, and a Rajai Davis baseball card.  This season, on the day before Enzo's first baseball game, Traci and Frankie were at the Coliseum and Traci took the ball, hoping to get Rajai's autograph on it for her nephew.  When Rajai was going by, Traci asked for his autograph but he said he didn't have the time right then as he was going to batting practice.  Traci yelled out the whole story of how this was her nephew's baseball and that Rajai himself had thrown the ball into the stands for Enzo last season when he was still in his mom's belly, etc., etc.  I like to imagine all this being blurted out in that excited way people do when trying to sell you something before you slam the front door.  "Well, now that you told me that story of course I'll have to sign it!" said Rajai coming over to sign the ball for Enzo.  Cool. Thanks Aunt Traci and thanks Rajai Davis.  I never did ask if Rajai mentioned the condition of the ball, 'autographed' by Enzo's dog who found it before Enzo could play with it.


As for Enzo's first game experience, I think it was obvious that he had a great time.  I know I did.  And how about Rajai?  He was the first A's player to score a run that game and he made a fantastic catch at one point.


(There you go love.  This day is now recorded for ever in the indelible records of cyberspace!)


In other Enzo news,  Traci threw a Meet Enzo Party for some local friends and family recently.  I think everyone enjoyed being around him very much.  Enzo probably met more people in that one day then he had in his entire life previous. 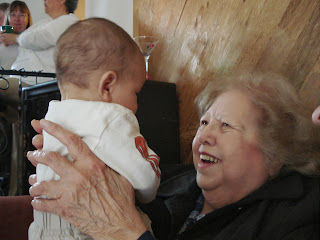 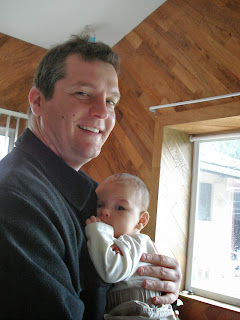 
Enzo has now been to four A's games, I believe, including the A's season opener that followed two days after his first game.  Me?  I went to just that first game.  While he was at the game this last Sunday, however, I did have a blast at the 26th Annual Spring Meet VW show with Matt, Mitra, and Don. 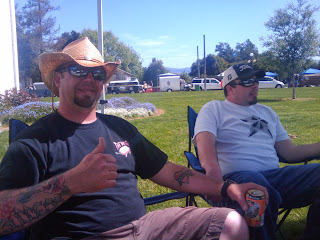 (Matt and Don taking a break from checking out the VWs and venders.) 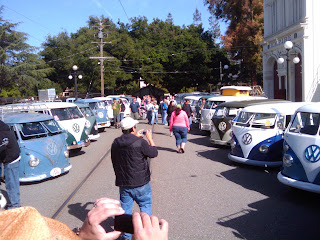 (That's the edge of Matt's bus at the very right of this photo.)

I drove Matt's Bus and he drove his Bug.  We decided that I won the "Best Blue And White Bus Driven In From Campbell By The Owner's Friend" award.  We looked for the award plaque but couldn't find it.  Turns out the judges weren't awarding in that category this year.  Maybe next year.
Posted by Randy at 5:37 PM No comments: