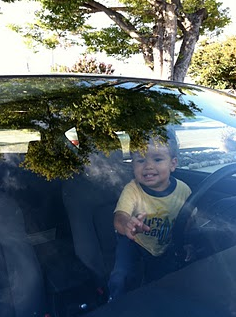 The pain-in-the-butt side of The Kid seems to be hiding out.  Sure, he ran off and then threw his tooth brush when he saw that I followed him to keep his toothbrush in the bathroom.  But that was about it lately.  Other than that it's been all hugs and cuddles and love... and Top Gear.  The new season is running.  Tami takes Ana to dance class once per week and that means Enzo and I get some alone time.  This week we ate burritos outside on the porch, watered the plants together, played with the soccer ball and the football.  And then, rather than go to bed exactly on time, we watched an episode and a half of Top Gear.  Towards the end it was clear Enzo was getting tired so we went off to bed, no issues at all.  Sometimes Enzo is not really in the mood to sleep but not so that night.  We both walked to bed and chatted a bit until sleep fell upon him.  I enjoy these days we have together.

My daughter is becoming even cuter by the day.  She is just soooo soft and pretty and her half smiles, as most of her smiles curl up each side of her smile only half way, are quite attractive.  I like it when she is lying down and she grabs my hand and pulls my hand around, gnaws on my fingers, and rolls around just being a happy baby and sharing it with me.  She can be mesmerizing.  I feel I don't hold her enough.  Not as much as I would like anyway.  Not in a bad way but in a way that reminds me I can not have enough of all that I want when I want so much good stuff.

Enzo and Ana get along gorgeously.  Enzo will bring Ana toys and show her how to use them.  He will still give her little kisses.  Once I was amazed at how many toys Enzo was able to fit in her little arms under her chin as he just kept giving her more and more.  She likes to watch her brother.  They seem already connected; significant to each other.  I think Enzo asked for "Baby" about as much as he asked about "Mommy" when he and I had our evening together.  I caught a little video recently of one of the times they were playing together.  You can hear Enzo at one point ask in his own way "Where is the Palo?... See!"  and then he goes and gets the "Palo" for her.  Palo is how he says pájaro (bird) and he currently calls all flying animals palos which is why you see him get up and bring his sister the toy butterfly which she clearly enjoys to munch on.

Another video I got is of Enzo singing.  He recently learned how to turn on the radio in the kid's playroom, somehow distinct from the entire house that is their play area, and how to control the volume.  I walked by and he was dancing and spinning around and giggling.  When I rushed back with my phone to record him he had moved on to singing.  You can hear him at one point say "bye-bye" to the light when he turns the radio off and then "more" when he turns it back on.

The kids are great together.  My son is an angel again... most all of the time.  My daughter is as glowing and wonderful.
Posted by Randy at 9:51 PM No comments: 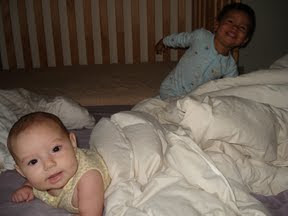 (Waking up to the flash of pictures in the morning.)

My daughter continues to prove mastery at the skill of absolute adorableness. My son, at the ripe mature age of 20 and a half months has decided that he has become such a master of adorableness that he would add to his repertoire the skill of pain-in-the-buttness. He is no master of this inevitable craft as of yet but he has some talent with this skill to be sure.

At first I wrote off early grumpy signs of his newest venture as the result of mere teething discomfort. He is teething with the sharp fang teeth and the molars popping out. And surely he would not begin the pain-in-the-buttness skills so soon while he still is working on mastery of speech, I told myself for comfort.

Several days ago he went to bed fussy, woke up fussy, and went to bed fussy again. Thankfully he can't help but pose and smile for a camera. That next morning Ana woke up first so I took some pictures of her. Enzo started to move around so I aimed the camera at him and the flash did it's magic. The Kid's smile woke up before his eyes did! All happy and cute and stretching and posing for the camera my son joined the world of the conscious that day. Grumpiness didn't have a chance of sticking when my son started the day off in front of a flash. These kids are just so good at being cute and beautiful.

Other evidence has since appeared, however, that we are not just talking about teething. Enzo is good with a cup or a glass and I let him hold and drink water from adult glasses often enough. When it's too full or Enzo seems a little distracted I will sometimes leave a hand of mine on the cup to guide... just in case. Enzo, as it would turn out, did not recently feel that he needed such assistance on a particular occasion and made it quite clear. I assured him that I would help anyway. At that point The Kid grabbed the mug, paused, and then threw it out of my reach. From there it was all gravity and physics but to tell you how it ended; there were more pieces of mug then when we started.

I was flabbergasted. I was shocked. I didn't know what to do.  My ego was offended.  That's what ego's do after all. This super adorable kid just threw a cup and it broke because he didn't want my help. What was I supposed to do? I could slap his hand or face or swat his butt but that didn't seem to make sense here and I personally have decided that I will go my whole life without hitting to teach a lesson to my children. I know, everyone has an opinion on this. But for me, it won't work any other way.  Perhaps others have a clearer mindset but I am suspicious of myself using any method of teaching that simultaneously vents my aggressive anger and I don't think I could hit my children in any way that did not include me releasing my anger on them.  I wouldn't be motivated to do so unless I was partially blinded by anger so I will just stay away from it all completely. I could yell but I didn't think that would teach Enzo anything right then and yelling often resembles hitting. I was standing there with a quiet child waiting for a response and a broken cup surrounded by water on the floor; frustrated and immobilized in indecision. Until that moment redirection always did the job. But here I was with an extra motivation or two. Redirection works when you don't want a kid to do something. You redirect them and they start to play with something else. But at that moment I also wanted to release my frustration and I wanted to teach my son a lesson that throwing cups breaks them and that is not a good thing. After several seconds I simply gave up, picked him up, and set him in a different spot so that I could clean up the mess. Very unsatisfying at the time. Two motivations unmet; my frustration un-vented and no lesson learned by my son.   I think it was better to miss teaching the lesson, which I didn't know how to teach, than to cause an undesirable lesson while venting the frustration I was feeling.  But that can't keep happening indefinitely.  The frustration was gone a minute later as was any thought my son had for the cup. Since then, I've been thinking and talking a little about this and I have come up something better that I could have tried.  I think I would have been better off telling Enzo that I didn't like that he threw the cup in a serious and reasonable tone and then showing him that the cup was now broken.  My goal would be to show him that I was sad about the behavior and that there was an undesirable consequence to his action.  Also, if any of this sticks with him over time, and he learns to copy and mimic the behavior his dad has modeled, he would be an impressive kid.  Maybe my son would tell another kid "I don't like that you did that, look what it caused" instead of yelling "No" or trying to hit another kid in school who tears his drawing.  I'm trying to put a plan together based on conversations I have had as I have no real knowledge or memory or reading or research or experience that I can think of to help in a situation like this.  I need to read a book.  Or, I need Tami to read a book and let me know what it says.  If you have an insightful suggestion I'll listen.

Time will tell if I master the skills of parenting at least as quickly as my son masters the skills of youth.  If not, I'll just keep a camera with flash nearby at all times.

Kid, if you are reading this someday- I love you.  Hopefully you eventually learned not to throw cups in frustration.  By the way, it was your mom's cup that Tom gave her back in high school so you may want to keep an eye out in the used stores for a cup with lots of penguins that says "One in a million."  It would make a great mother's day gift.
Posted by Randy at 10:34 PM No comments: 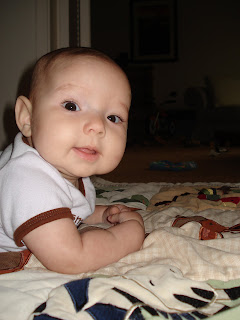 Ana is 4 months old, beautiful, calm.  She has a long attention span in that she can rest on her belly holding her head up and appear to actually be watching what is going on around her for a very long time.  Unless she decides she has to pee or eat, it's easy to get next to her and have a chat while she gives me her full attention.  She'll even raise a smile. When she does decide to roll back on to her back, she has the softest belly in the world for little kisses.  I have to compete with her feet which she discovered a couple of weeks ago and which will often block belly-kiss access as she holds her feet to her mouth.

Happy birthday my beautiful Ana.
Posted by Randy at 11:29 PM No comments: