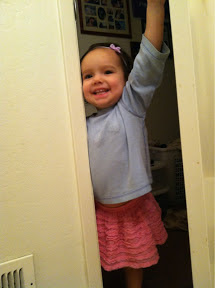 This is a picture of Ana this morning. After she woke up she went potty, took off all of her clothes, and then went and pulled clothes out of her dresser and dressed herself. Yes, she found and put on that hair band, inside-out shirt, and skirt. She is so cute!

Ana has been winning me over. Even Tami has noticed that she has really been loving me more and more lately. I like this phase. She gets the most excited of anyone to see me these days, only runs away while laughing, never refuses a kiss, and likes me to hold her. Unless she wants something else more. Still, a great time to be Ana’s Papi.

Ana continues to smile a lot. She is also very capable with Enzo’s train tracks. I don't know what is the normal range of hand eye coordination at her age but it is simply fun and amazing to me that she can problem solve so well and manipulate the tracks so well when she plays. In general, humans are simply amazing. In particular, my Ana is absolutely beautiful and amazing! Her vocabulary continues to grow. Much of her vocabulary is not perfectly distinct yet but by following along it’s fun to realize what song she is singing and what she is telling me about. It's also fun to hear Enzo have conversations with her. He takes on the role of mature older brother and conversationalist by asking questions and sometimes elaborating after her responses. She takes on the role of attentive listener and gives expressive and simple responses. It's adorable.

We went in for Enzo’s three year check up. All is well. Also, he got two shots and didn't cry at all. No crying! Either I was a horrible cry baby as a kid, my kids are super star shot getters, or shots just are not a big deal. He basically made a noise to indicate he wasn't fond of getting the shot, then did the same for the second shot. No tears, no scream during or after; just a complaint milder than when we ask him to eat something other than bread, cheese, or fruit.

Tami and I don't know everything about what is a medical concern and what is normal so we sometimes stress unnecessarily. In this case all was fine..But during the stress before we knew that there was nothing to fear, we both felt stress and wondered what as parents we were doing wrong to not keep our kids in perfect health. Tami wondered if she was doing well enough as a mother especially with providing nutritious meals, and she is a wonderful mother, while I contemplated how having children, the greatest pleasure I have ever imagined or experienced, could cause so much stress in causing concern for well being and a greater weight in responsibility than I could ever have imagined. Anyway, we may not be perfect but I think over all we make up in love and adoration for what we lack in parenting skills. Besides, at least for this past weekend, all was normal despite our worry that we were messing up our kids somehow. Which brings me back to the point of this post, the kids are both good, healthy, and beautiful.

Some other Enzo news. He is starting to look like an old boy. I have said that before but we are entering new territory. His shape is changing, his body hair is changing, he is learning new things easily and quicker, his physical and verbal expressions are becoming more nuanced- and this added complexity in expression really stands out. His over all representation is maturing.

I started, I have no idea why it took me so long to start doing this, asking him questions and drawing out longer conversations with him rather than asking yes and no questions all of the time. It's great. My favorite two surprises the first time I did this were that he made thoughtful answers and that he often replied with a pause and then "Well,...." Well? When did he pick up thinking-conversation-fillers?

Despite all of this development, he is still my little boy. He will still snuggle into me when I pick him up, ask me not to get up when I lay down next to him to help him sleep because, as he says, "if you get up it will make me sad", and gets excited when I get home.

The funniest update with Enzo is about his toy storage tendencies, otherwise known as hoarding. If you were to look at his perfectly neat bed on any given night you would see his pillow neat at the top and his blankets knocked off to the side. He would be sleeping on the bed without a blanket and with only the top of his head, if anything, just barely touching the bottom of the pillow. You could then carefully lift up the pillow without disturbing him and you would find about 30 toy cars and trains. Yeah! What? It's pretty amusing. I'm not sure what the point is. We had noticed a couple of weeks ago that he liked to have toys in and around his bed. Sometimes he would run off to his bed in the daytime to stash a toy. Other times he would take a car or train or two with him to bed. Then we noticed that toys weren't just in bed but hidden around his bed. Two nights ago, however, Ana chances upon this giant stash when she moved Enzo's pillow. I got home and Tami said "you need to see something funny and go look under your son’s bed." I look forward to asking him about those toys. He also had a stash of toys he doesn't want Monte to chew on. He keeps those in the kitchen with the cutting boards. I happened to be there when he started expanding that collection and adding cars to it. I told him that toys don't belong in that drawer but it’s ok to keep leaving the rubber ball in there to keep it safe from Monte. Enzo just said ok and took the other toys off somewhere. When I check that drawer these days only the rubber bouncy ball is in there. Enzo will sometimes take it out to play with and then place it back in the drawer. I wonder if there are other stashes that this kid has around the house. I wonder if he doesn't use the pillow to sleep because it covers his toys or if it’s a good toy cover because he doesn't use it to sleep. Anyway, it is a pretty funny sight to lift a kids pillow and to find that many toys piled under it.

Kids are funny. And cute. And awesome. And having them can be a bit stressful when one feels responsible and worries about them. But these kids are great at making regular days beautiful.
Posted by Randy at 8:07 PM No comments:

Friday, among other adventures, we went to the Steinhardt Aquarium in San Francisco. After, we had dinner in the city with Tom and Hung. Today turned out to be a great all around day. Without trying very hard, it looks like we have really made the most of my two weeks off from work. And, there are still a couple of days to go. Here are some pics from the day. 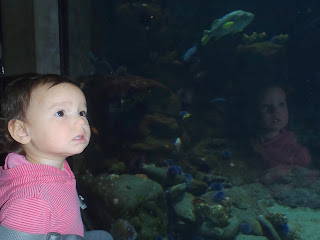 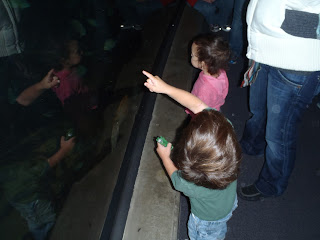 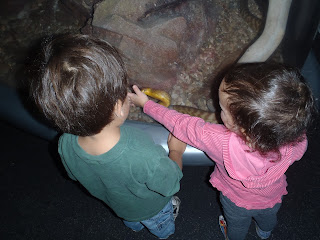 Ana playing hand-blocking-the-snakes-head-forcing-snake-to-keep-on-looking-around-and-moving-along. Safely played, of course, as snake was behind glass. Ana liked that game; probably more than the snake. 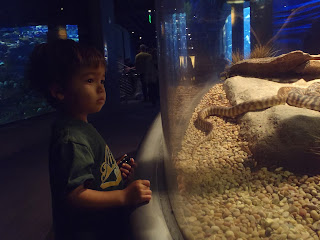 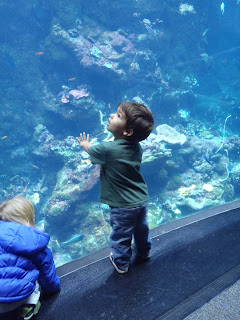 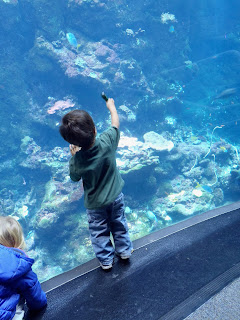 Hey fish! Look at my train! 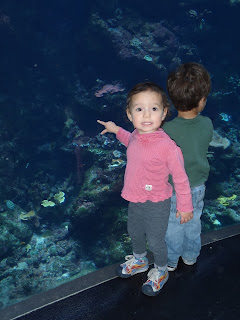 Mami, did you see these fish?! 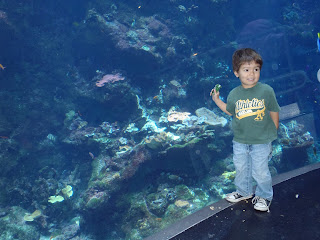 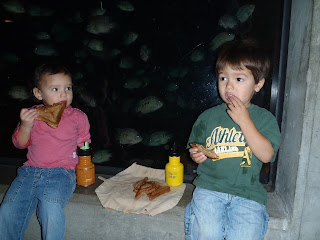 Lunch time. Moments later Enzo decided to try and feed the fish by asking if they were hungry and then smooshing part of his sandwich into the glass. 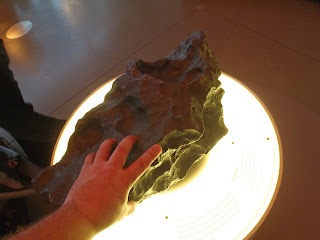 I am so excited about this! After the Academy of Sciences remodel years ago I couldn't help but notice the meteorite  was gone. I looked forward to that meteorite when I use to go to visit. Now, new exhibits have been completed since our last visit and.... it's back!!! 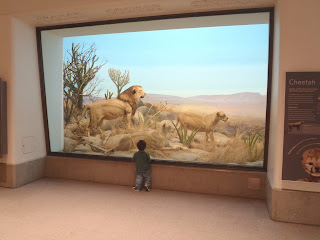 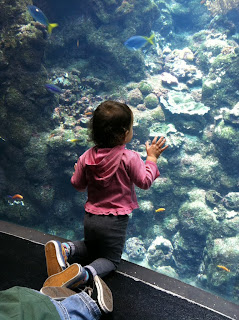 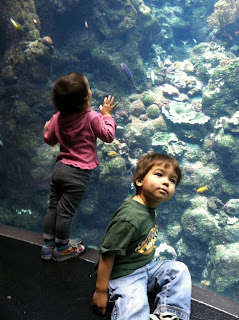 These next two pictures are special: 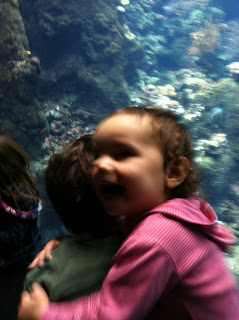 Without warning, Ana turns and lunges at Enzo with a bear hug around the neck. 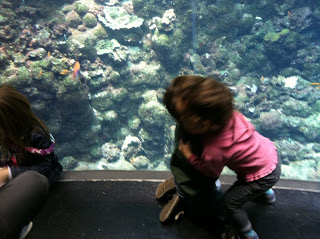 What you see in the above two pictures is evidence of a new development. A development which completely surprised me. Why? These are photos of my kids attacking each other and laughing! When did they learn to roughhouse without complaining? What am I watching? What am I listening to? Are those really laughs?.... Yes, they are actually laughing and wrestling each other. I didn't even know I was looking forward to this; very cool. Also, unbelievable if I hadn't seen and heard it myself. 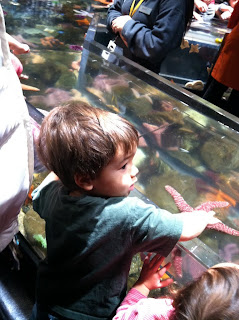 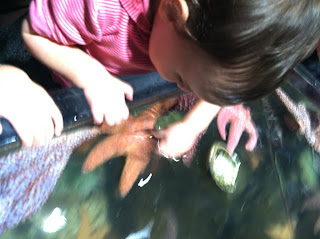 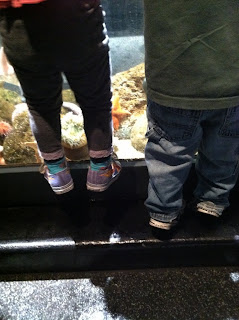 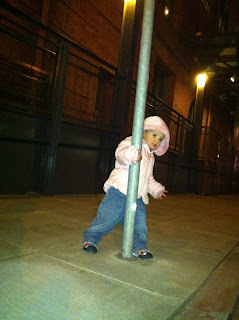 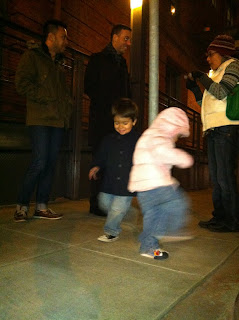 Walking and playing and running and spinning after dinner with Tom and Hung.
Posted by Randy at 11:58 PM No comments:

First Snow Trip for the Kids

We spent an excellent couple of days at Kathy and Chendo's house in Truckee. It was the kids' first trip to the snow. Patrick and Nicole were visiting from Hawaii and we had a lot of fun visiting, playing, hanging out, and welcoming in the New Year. Well, I fell asleep before midnight but I welcomed it in the next day. As Tami pointed out, this was the first time I slept through the turn of the year while she stayed awake.

Walking out in snow clothes for the first time.

Nicole getting Ana use to the sled before Ana goes on her first sled run.

For every down hill run, an uphill walk is required.

Tami getting Enzo use to the sled before his first ride.

He liked it, too.

Those kids were spoiled. All of the adults were happy to take them down the hill multiple times and then pull them back up the hill while the kids sat back in snow-luxury.

The kids eating icicles, pulled from right out the window, that were hanging from the roof. I had never heard of this but they seemed to enjoy it. Patrick, also new to the snow, tried it and said they taste like wood from the roof.

We had such a great time. We don't see these friends very often but they are always so welcoming when we do see them. Holidays and vacation make for a great time of year. Enzo is still talking about the trip days later and talking about everyone by name. Besides Chendo teaching Enzo to say "Let's go Giants!" he also taught him to say "That's right." That's right is the new catch phrase and has come up often. I can't type the style but there is a certain inflection that goes with the way Enzo says his new catch phrase. He asked me a question tonight, I said "Right." He rolls out "That's right."
Posted by Randy at 11:54 PM No comments: