Girl with a Pearl Earring and a Camping Trip 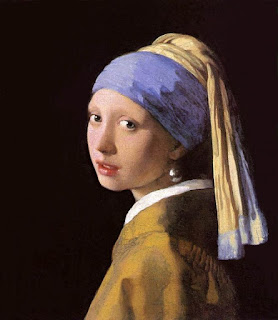 Today we went to see the Girl with a Pearl Earring. She is part of the Dutch Masters special exhibit at the de Young Museum in San Francisco's Golden Gate Park. A few months ago Tami and I picked up a beautifully framed print of Girl with a Pearl Earring at Goodwill and it has been hanging in one our house since. Then, this special exhibit came to the de Young that includes this original and I have been wanting to go since it opened. Finally we made it and with only a few days left before the paintings leave town. These paintings usually reside in Netherlands. 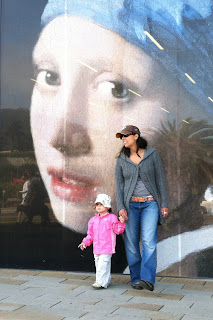 (Outside of the museum next to the advertisement for the special exhibit. No photography allowed with the art inside.)

As I have read and heard, there is something amazing, beautiful, seductive, and powerful in the original that is not present in any print. I was curious to see if this were true.

I guess you just can not capture the full effect of the 3-dimensional paint and the bold color of pigments in the paint with dyes in flat paper. The prints are still attractive, but the original is at a different level. She shines, she stands out, she requires attention. Her face is painted like a photo; no brush strokes. All the rest is a little less precise. So, like looking at a person in real life, that which is the center of your focus is precise and the details nearby are clear but less detailed. As the painting is subtly like this my eyes are constantly drawn in to her face. And as this is a painting, it is not rude to marvel and stair at the details. The cool thing is that the print in our house now looks better to me, it triggers the memory of the original. I guess that is what a picture hanging in a house is for. 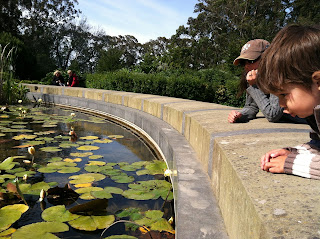 (We took some time to look at the little fish and lotus flowers in the pond.) 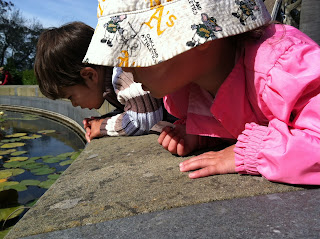 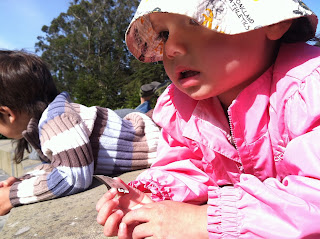 Also, last week we went on a neat camping trip with a whole bunch of families from our kids' preschool. There were more then 20 kids and almost as many families. There were probably about 50 people in this group camp site at Mount Madonna. I didn't know the families, though I have seen a few of them before. So, it wasn't like going camping with close friends. I suppose I can try harder to socialize next year when we do this. But what was really fun was watching the kids play and seeing how Enzo interacts with his friends from school. Ana was playing too but she is still pretty young so it was easier to see the developing relationships with Enzo. I didn't get any pictures of him and his friend J but those two boys together were like two peas in a pod. They were two of the youngest there, were already buddies from school, and ran around trees together endlessly. When they weren't together for some reason, I usually found Enzo playing with a ball and R, a slightly older girl he has known for a long time. Here are a few photos. 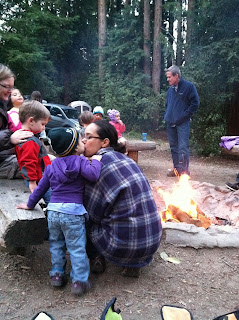 Enzo and I were talking about how shadows are made. Then we had fun playing with them. 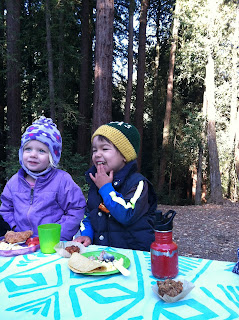 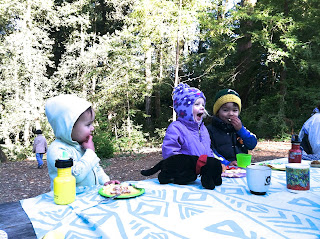 I had never before met this little girl sitting by Enzo. They are friends at school, as well. They took turns making up one nonsensical joke after another. They were pretty funny. I couldn't tell you if the jokes were funny or not, they both thought so, but it was very amusing to watch them tell the jokes and laugh loudly at them. 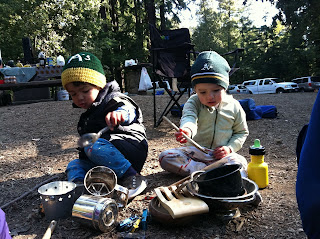 Our beach/camping toy bag. One of the best simple ideas ever. It's full of used wood and metal cooking utensils and a several hot wheels cars. 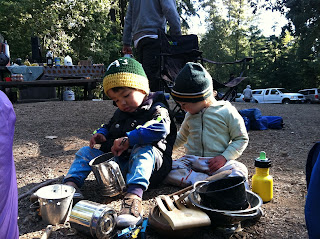 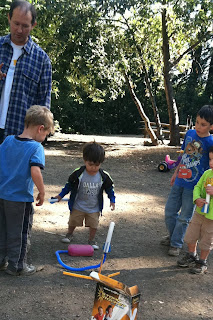 This was a hit. One parent brought this rocket launcher. The kids would jump on the bag and the air pressure would launch the foam rockets into the air. A huge hit with the kids. This is something we may need to get for ourselves at some point. 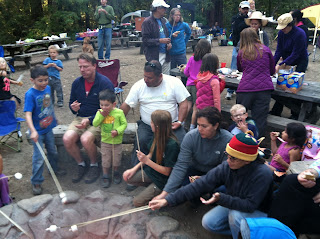 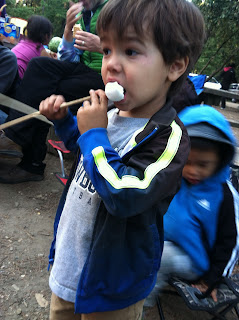 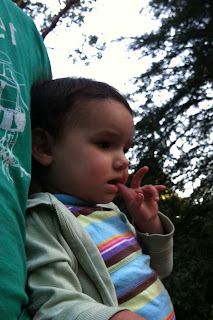 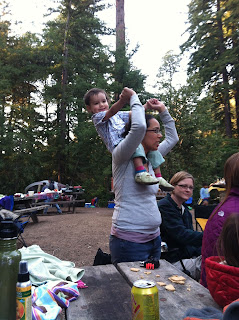 The first camping trip of the year was a good one.

Ohhhh! And another big piece of news. I start a new job in July. I applied for an assistant principal position at a high school and I got the job! Yay! I have imagined working at a high school since first imagining a career in education. Yet, I have been happily working in middle schools for eleven years, three of those years as an assistant principal. In just a few weeks, I'm off for a new career adventure.